An eclipse of the sun occurs when the orbit of the moon crosses in front of the sun as seen from the earth. The shadow of the moon follows a narrow path on the surface of the earth, bringing daytime darkness for a brief period and allowing observers to see a range of unusual natural phenomena. The most spectacular sight is a total solar eclipse, when the moon completely covers the sun, with flames of crimson prominences licking around the jet black disk and streamers of the solar corona reaching far out into space.

As the moon goes around the earth it follows an orbit which is elliptical, appearing very slightly smaller when further out and larger at the closest point. Whilst it is not possible to detect this difference in size without accurate instruments, when the moon is at its closest point it is large enough to completely obscure the disk of the sun and the closer it is the longer the duration of the eclipse. At a more distant point, the sun is not completely covered and a very small, bright circle or annulus remains visible. This is known as an annular eclipse and although it lacks the unique drama of a total, it remains an unusual and interesting event particularly when it is possible to observe the effect of the declining light levels on wildlife. 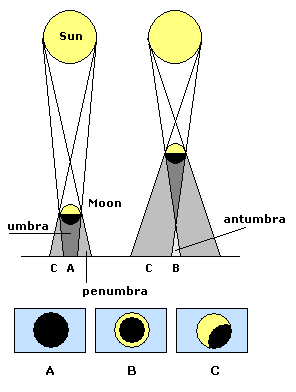 Astro-Eclipse is a Trading Name of Sportif International Ltd. Sportif is a fully bonded Tour Operator with the Civil Aviation Authority ATOL 2910. This bond ensures that all elements of your flight inclusive holiday are fully secured and your money safe.
BOOK 2020 SOLAR ECLIPSE TOUR